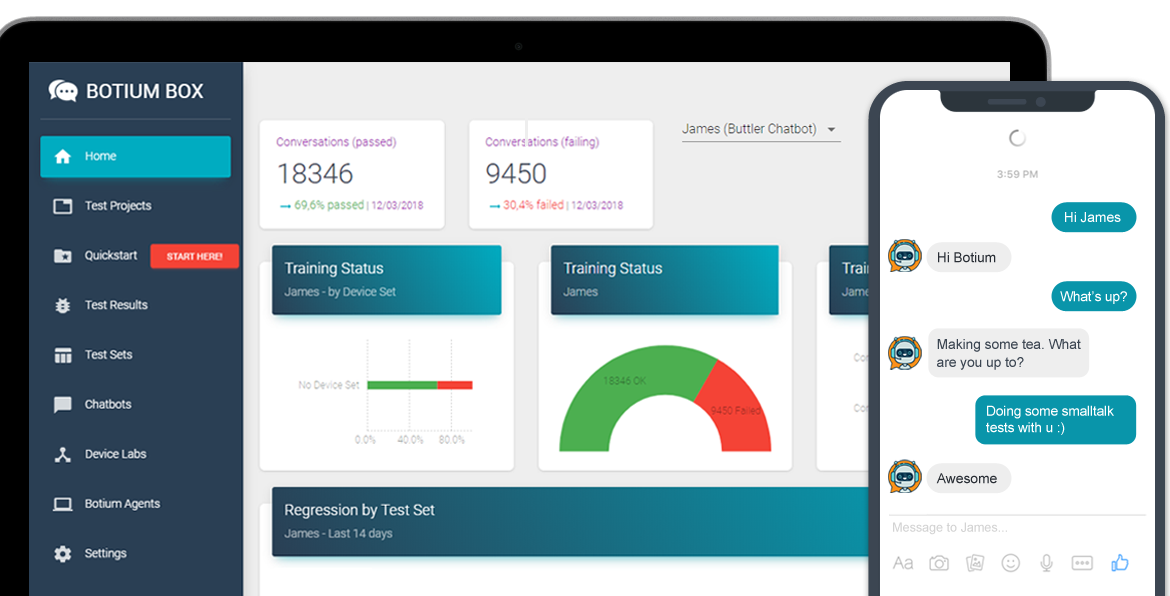 Testing a chatbot with Botium

As promised in my previous blog, I am going to share my knowledge on how to test a chatbot.

Manually testing a chatbot is laborious and takes a lot of time. But are there any chatbot test automation tools? Yes, there are. Meet Botium.

To solve the problem of manually testing a chatbot Botium was created. It is an open source testing tool which bills itself as the “Selenium for Chatbots” . Botium allows testers to automate the testing of chatbot behavior using APIs. Tests can be executed in seconds, and they are easily repeatable with every software update.

Botium even provides a total management toolbox with predefined test environments and test sets with thousands of instant runnable tests.

Botium – how to test a chatbot

Sauce Labs offers a cloud based Selenium Server which can connect with Botium. Together with Sauce Labs I wrote a blog describing new testing tools like Botium, which are making it easy to execute automated tests for AIOps applications like chatbots.

Botium was the first tool I used for automating my chatbot tests and it is now an important member of my software testing tool stack.

In the Sauce Labs blog I discuss the following steps using Botium:

This Sauce Labs blog is a great starting point to learn and use Botium.

Mind you, in this blog I do not explain how to connect the Sauce Labs Selenium Server with Botium. That is another how-to which you can find in the Further Reading section below.

New testing tools like Botium are helping to address the challenges of testing chatbots by making it easy to execute automated tests for chatbot applications. As Chatbots grow in importance, automated testing solutions will remain critical for ensuring that Chatbots actually do what their designers intend. 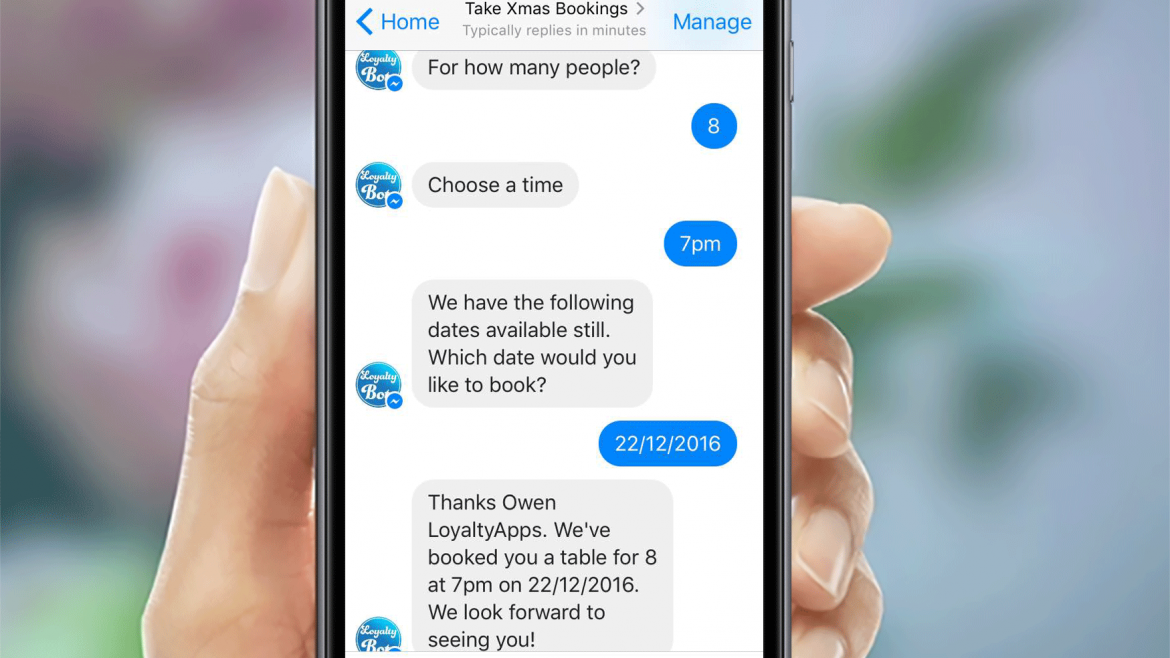 Testing chatbots is one of the things I like to do in my pastime. And it is not hard to do. When you have a Facebook account you can use the Facebook Messenger. And what about WhatsApp or WeChat? Also, a lot of companies use chatbots to talk to their customers online.

During the testing my knowledge about the chatbots increased. Having this knowledge is nice, but why not share this knowledge? Sharing is caring! A lot of information can be found online, but it is scattered and not always complete. Or even completely wrong. Not every chatbot uses artifical intelligence for instance.

That’s why I am going to give away some free stuff. I will take you in my journey of testing chatbots and share my experiences. This shared content can be commercial or technical, but always with a sharing message in mind. For me it is all about educating my readers on chatbots.

What can you expect?

Sharing knowledge about chatbots sounds good, but what knowledge will be shared?

Expect the coming months answers to the following questions:

Answers to these questions will be blogged monthly on TestingSaaS.

Remember this post? Well, now you know what TestingSaaS aka The Marco Polo of SaaS will do the coming months.

Do you want to know more?

Chatbot documentation is not the only service TestingSaaS delivers.

Do you need a manual for your (SaaS) software, a blog, a whitepaper or even an FAQ? 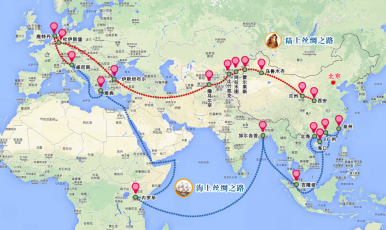 The Chinese ecommerce and the new Silk Road

Chinese ecommerce is booming. Ecommerce platforms like Alibaba.com (B2B) and Taobao Marketplace (C2C) are serious competitors of eBay and Amazon. But it has to keep a keen eye on its domestic competitors like Tencent and JD.com. That’s why it is interesting to see Alibaba is becoming the exclusive distributor of Salesforce in China. But first, why is TestingSaaS interested in Chinese ecommerce?

China and the ancient Silk Road

As you maybe have read in an earlier post, I am a huge fan of ancient explorers, especially the adventures of Marco Polo and his Silk Road and China adventures. When the Chinese president Xi Jinping announced in september 2013 he wanted to initiate a new Silk Road I got intrigued. I am no trader, but interested in how China was going to do this challenging endeavour.

One Belt One Road

To build a new Silk Road you have to design a new infrastructure. China wants to do this on land by roads and train rails , but also by sea. This initiative is called One Belt One Road, in 2016 wisely renamed Belt and Road Initiative, because it is not one transportroute. There are many, like the ancient Silk Roads.

Why the New Silk Road?

The Eurasian countries were the main part of the ancient Silk Road, They were the corridor between Europe and China. But, because the New Silk Road is also maritime, China partners also with sea-bordering countries like Sri Lanka, Turkey, but also the Netherlands.

That not only changes the geopolitical landscape – China gets more power – it also has financial effects. Through its investment banks, China provides loans to its partner countries in the New Silk Road. What happens when the project is not profitable and the partner country ends up with a long term loan, a loan-trap? Interesting, but not the subject of this blogpost, so we will carry on.

Through ecommerce customers can buy goods via the internet. These goods have to be shipped and delivered. By the New Silk Road, Chinese and Western ecommerce companies can deliver the goods by roads, rails or by sea. Mind you, the Belt and Road Initiative is initiated by China, so their interests will be their priority, but that does not mean western companies can not profit. Let me illustrate this with Alibaba.com, China’s wholesale B2B trading platform.

This summer I read Jack Ma’s biography. (It’s an Amazon Link 😉 ) Jack Ma is co-founder of the Alibaba Group, a Chinese multinational conglomerate holding company specializing in e-commerce, retail, Internet, and technology. One of its companies is Alibaba.com, China’s largest integrated international online wholesale marketplace. And not only for Chinese brands, but also western. Brands like Philips, Apple but also Adidas, Burberry and many more.

Why are these western companies interested? Well, it’s all about the money.

Not only is China a highly populated country with a lot of consumers. Jack Ma knows this and wants to enable the Chinese to buy goods easier through ecommerce. Next to that he also made a traditional Chinese Day, Singles Day, every 11th november, a spectacular consumer event, with a lot of international celebrities, getting a boost from China’s expanding middle class and a massive online population.

In its 10th year, the annual Singles’ Day event got 213.5 billion yuan ($30.7 billion) in merchandise sales. That is a lot and that is why the western companies like Philips etc. are very interested in working with Alibaba.

Why Salesforce and Alibaba?

Alibaba recently became the exclusive seller of Salesforce’s cloud-based customer relationship management (CRM) software suite in the Greater China region. It is a win-win situation for both sides.

Salesforce will definitely increase its revenue in the Asia-Pacific region by partnering with Alibaba. China is a highly populated country, with a booming increase in ecommerce companies and all these companies need a solid CRM solution in the cloud.

Alibaba will also benefit, because it does not have a CRM solution of its own for Small and Medium sized businesses. Salesforce will fill this gap. Next to that, Alibaba’s biggest Chinese competitor, Tencent, owns WeChat, a messaging solution with pay capabilities. It is an all-in-one e-commerce and CRM platform for companies. With Salesforce, Alibaba can make a fist against Tencent.

Observing the Chinese ecommerce ambitions (Alibaba, Tencent, JD.com etc.) I see the New Silk Road, initiated with the Bet and Road Initiative, is playing a big role. By creating an international solid infrastructure (sea and land) China will create a new Silk Road, but now for modern products.

How is this going to affect the Western ecommerce? Time will tell.