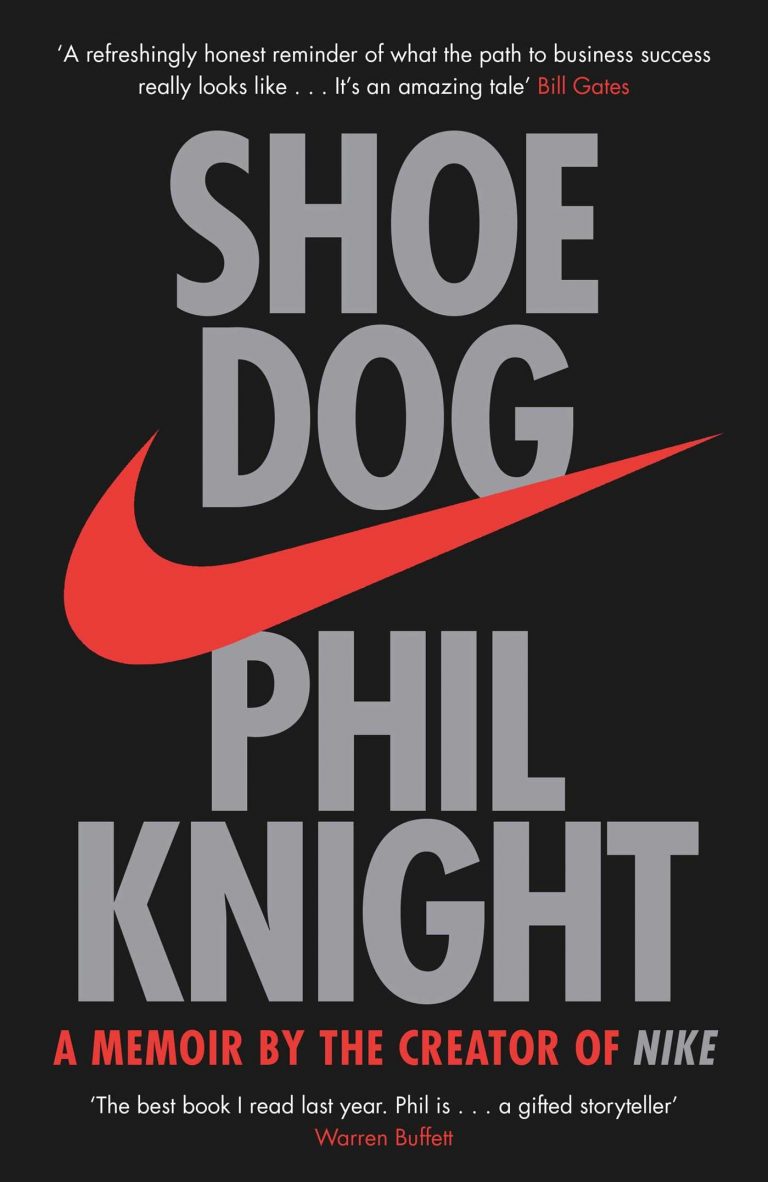 A quote from Shoe Dog: A Memoir by the Creator of NIKE, Phil Knight, Scribner, 2016

“So that morning in 1962 I told myself: Let everyone else call your idea crazy . . . just keep going. Don’t stop. Don’t even think about stopping until you get there, and don’t give much thought to where “there” is. Whatever comes, just don’t stop.”

‘Shoe Dog’ is a great book for entrepreneurs.

It shows how Phil Knight, together with other running geeks – remember Apple- started Nike with its forerunner Blue Ribbon Sports.

And it is not always rainbow and sunshine, it is brutally tough, financially and personally.

Why did I want to read ‘Shoe Dog’?

The last years I follow a lot of podcasts about entrepreneurship.

One of these from Ryan Serhant mentioned ‘Shoe Dog’ as a must read and I thought ‘Why not?’

Well, it was not a mistake. Why? Let me explain.

Why is this book also relevant to SaaS entrepreneurs?

From marketing to founders, to managing and product, this book will help you understand what it really takes to build a successful solution. Here it is a shoe, but it also could be a SaaS app. And it also shows, next to your product, you need your marketing. The product does not sell itself.

Next to that, it is not only technology you sell, you sell a service and there should be a need for that service.

As an athlete Mr. Knight saw this need and took action. Against all odds, but always iterating, with the customer experience always upfront. That’s what SaaS entrepreneurs also must do.

It’s a boy’s book about starting a business you are passionate about.

Everybody is against it, you hold on against all odds, and at the end you ‘win’.

But still, there are personals costs, like not having all the time for your children and at the end losing one. That’s tough, that’s a life lesson, it’s not only business. Family and friends count!

Therefore it is also a ‘coming of age’ book where Mr. Knight describes his life and at the end looks back at it. It’s not only glory, it’s not only misery.

Mr. Knight never brags, he shows how he did business and it was never easy.

As a starting business- and middle-aged man (😉) I recognize a lot of things I also did in my younger years. However, I also learned that I still can do a lot.

Next to the starting a business part, I also like it because it  an insight in Japanese business and culture. It shows how an American started a million dollar business with japanese partners, just 15 years after World War 2. That requires courage and stamina.

And even after Nike and Onitsuka’s business relationship ended bitterly Mr. Knight’s admiration for Japan continues.

I’m not a runner myself, so I had to get used to Mister Knight’s fascination for running.

But hey, I am reading a book written by Nike’s founder. Then you have to get used to the running virus.

Maybe I even start running myself this year. It is a solo sport, you run against yourself.

As an entrepreneur, that sounds very familiar.

At the end Mr. Knight mentions Nike, since the seventies, has been accused of using sweatshops to produce footwear and later on, apparel. He counter argues it, stating Nike has made improvements and it is way better than when the Nike factories started in Asia.

For me, as a person, it was not necessary to have this in this book. But, because it are his memoirs, and Nike is Mr. Knight’s founding baby (as TestingSaaS is mine), I can imagine why he mentions it. Nobody likes to have his baby criticized.

What I learned from ‘Shoe Dog’?

It is all about passion, but if you do not persist and work with the right people, your dream, to work with your passion, will not come true. It is not only rainbow and sunshine.

You will have to do things you do not want to do, like long negotiations, setbacks, paying taxes (even if you don’t have to) and keep a constant eye on your finances.

But still, keep the passion and do not get tangled in daily hassles.

Otherwise you get burned out. And that experience I do not want to have anymore.

‘Shoe Dog’ is a great entrepreneurial ‘coming of age’ book.

It gives an insight in how an ambitious guy from Oregon started a shoe business and became one of the sneaker giants.

And I envy Mr. Knight. Not because of his success. No, because he still had one person who could see his struggles and success, while doing what he likes best.

There is one person who is not here to see me doing what I like and even make money.

I wish my dad saw me now.

The Chinese ecommerce and the new Silk Road